The travelling translator....reporting from the exotic island of Reunion !!! 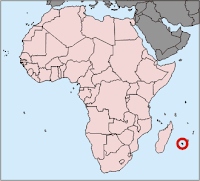 I am starting a new column today. A column featuring a series of interviews with translators who left their rainy western countries for a better quality of life in an exotic paradise. They are professional linguists, like you and me, working with clients from around the world, but they have ditched the big city life for a lifestyle in the tropics. Besides, it doesn't really matter where you are based to be a translator. All you need is some sense of adventure!!!

Our first guest interview is with Catharine Cellier-Smart from Smart Translate who lives and works on the exotic French island (a French overseas department) of Reunion in the Indian Ocean.  If you love translation and travelling, this one is for you!


Catharine, talk to us briefly about your life before you moved to Reunion.  I was born and grew up in south-west London, but my mother is from the north of England and my father was from Scotland. At Wolverhampton University I did a degree in European Studies, and graduated in 1992. I’ve always enjoyed reading and travelling (I’ve been to 57 countries, including North Korea), and since I’ve been living on Reunion I’ve taken up scuba-diving (I’ve dived in 17 countries) and hiking – Reunion is a small island, but has 1000 km of challenging treks.


Why Reunion of all places and how long have you been living there already? 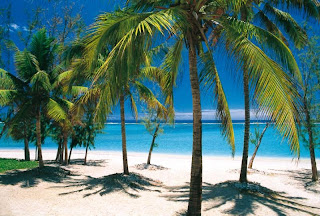 The third year of my degree was to be spent abroad. Normally we got to choose where we went, but another student and I were selected to start exchanges with the University of Reunion. This was pre-Erasmus, and the year we were in Reunion (1990-1991) was only the second year the University had accepted foreign students. After my initial year I went back to the UK to finish my degree and when I graduated in 1992 I decided to come back to Reunion “for a year or two”, which ended up turning into 16 years until my husband and I went to live in Seoul for my husband’s job! We came back to Reunion almost 2 years ago, so it’s now getting on for 19 years altogether that I’ve been here since 1990.

How would you describe life in Reunion in three words?
Melting-pot, nature, French

What languages do you speak and what made you become a translator?


At school and/or university I learnt French, Latin, German, Spanish and Portuguese, and I’ve picked up Reunion Creole and some basic Korean. French however is, and always has been, my main foreign language, and the only language (apart from Reunion Creole) that I translate from. When I came back to live in Reunion in 1992 I initially made my living for two years from teaching, translating and interpreting before moving into unrelated business work for 15 years. However even while working full time I often did professional translations during evenings and weekends. We lived in South Korea 2008-2011 and while I wasn’t officially allowed to work while resident there I continued to translate, and since we came back to Reunion mid-2011 I’ve been a full-time freelance professional translator.


Describe a typical day in your working life.

I tend to start the day around 8am by listening to the local news, and checking my e-mails, social media and world news. Next, depending on the day I either go to the gym/pool then work, or work, go the gym/pool then work some more. Sometimes I have lunch with a friend, but most days I eat at home. I work until 7pm, then we have dinner and if we’re not going out in the evening we watch a DVD in English and I work out on my elliptical. I generally check my e-mails again late evening. I try to make sure I get at least 1 if not 2 hours of physical activity a day as it’s far too easy to sit in front of the computer for hours on end.

What are the advantages and disadvantages of living in Reunion and how do they affect your life and your translation business?

The main advantage is the climate and quality of life. I work most of the year with my window open onto the garden, where I can hear the birds and smell the frangipani or ylang-ylang trees we’ve planted. When I’m not working I’m only an hour’s drive from the beach or the mountain summits. I love the fact that Reunion is such a mixture of cultures, ethnicities and religions that all live harmoniously side-by-side – it’s a model for many places. Because Reunion is French you have the advantage of French education, health and employment systems.

However there’s also a lot of unemployment (although that doesn’t affect me directly) and like many French overseas departments prices for everything are high – ≈ 1.4x more expensive than mainland France. The destinations you can fly to are very limited, and flights are expensive (especially during the school holidays), so it’s nigh on impossible for me to attend a translation conference or training session. It’s more difficult and expensive to get hold of non-French media (books, TV, newspapers, magazines, etc.) than it is in mainland France. There can be a frustrating insular mentality, a lack of cosmopolitanism, and the island is also subject to cyclones and heavy rain for part of the year which can lead to power supply issues.

The time difference (Reunion is GMT+4) with Europe and North America can sometimes lead to problems, but can also be an advantage, for example if a client needs a translation early in the day European or North American time.
Reunion doesn't have daylight saving, but during the northern hemisphere winter we're three hours ahead of most of Europe. If I'm not already working on a project this can mean a lot of time 'lost' until Europe gets to work. And a 6pm deadline for me will mean 9pm!

Where do the majority of your clients come from? Do you work with local clients as well?   Since I became a full-time translator about 45% of my customers are local direct clients (including for interpreting), and the remainder are mainly agencies from outside Reunion (there are no translation agencies in Reunion). I advertise in the local Yellow Pages, but word of mouth is very important here. Translating for Reunion clients can sometimes mean translating specific local words and concepts that aren't in any dictionary, or that exist in a dictionary but with a different meaning, for example: godon, sapotille, zatte, tamarin, argamasse, rhum arrangé ...

What is your advice to anyone wishing to earn a living as a travelling translator?
I've occasionally had requests for advice from colleagues thinking of settling here on Reunion. In my opinion you should only do this if you already have a client base who are not concerned about where you work from, as the local market is relatively small and it would take a lot of time to build up a new client base here. If you have a non-translator partner bear in mind the high unemployment rate (Europe’s highest), strict immigration rules for non-Europeans, and the fact that anybody who doesn’t speak French will have a very hard time getting by. 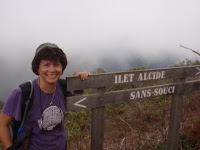 Catharine Cellier-Smart (@Smart_Translate) is a British-born French to English freelance translator (and occasional interpreter) based in Reunion Island, a French overseas department in the south-west Indian Ocean.

Have you got a similar story to share? Did you leave your country for an exotic paradise? Contact me at natali@worldsofwords.com if you want to feature your story here.